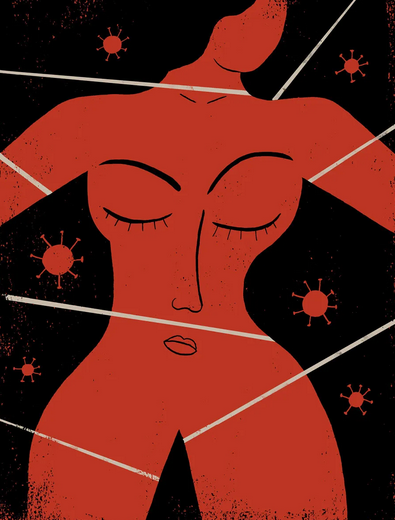 As the Pandemic Raged, Abortion Access Nearly Flickered Out

Countless quiet acts of heroism were required for those who needed abortions to get them. And still, not everyone did.

The door of the Planned Parenthood clinic in Columbus was locked when Larada Lee arrived for the first of two appointments she needed to get an abortion under Ohio state law. About a dozen anti-choice protesters had gathered outside, without masks, calling Lee a baby killer as she approached the door. Lee felt nauseated from her pregnancy, at times unable to keep down even water. Her bones ached. She was missing her classes at Ohio State University. The fatal shootings of Ahmaud Arbery and Breonna Taylor in recent weeks were weighing her down with a sense of hopelessness. Meanwhile, Ohio officials had sparked confusion by ordering a halt to “nonessential” abortions. “Being Black in the middle of trying to seek an abortion in the middle of a pandemic—it was really difficult to navigate all of those feelings while also trying to focus on ’I hope that they don’t take this away from us,’” Lee said in a recent interview with The Nation, recalling her experience back in March and April. The day before, when she went to an urgent care clinic wearing her hijab, the white male doctor had seemed to belittle her, calling her brave for coming out in a pandemic just to get a pregnancy test. “You could tell that they just were being, like, really short because it wasn’t at the forefront of their concerns—which, it was at the forefront of mine, because I’m pregnant in the middle of a pandemic,” Lee said.