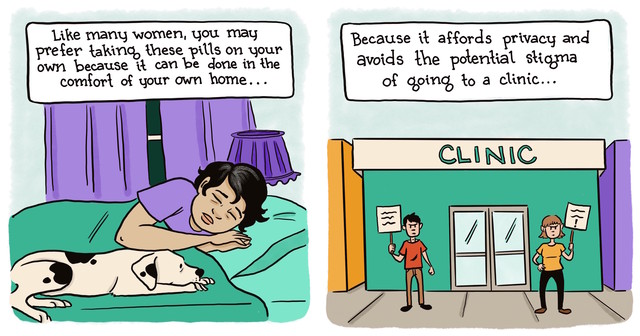 The Plan C team recently collaborated on an info comic featured in Bust.

Many people don’t know that it was women in Brazil who “invented” abortion pills in the 1980s. After seeing the “do not use while pregnant” warning labels on a common ulcer medication, Cytotec, women began taking these pills when they didn’t want to be pregnant. The pills worked well to induce abortion in the early weeks of pregnancy and proved far safer than other methods that were available (abortion was highly restricted in Brazil and therefore often unsafe). Word of mouth helped spread the news of this revolutionary technology, with women helping themselves and each other to self-manage this important health need.

Fast forward to the United States in 2017 and you will find that abortion pills are highly medicalized, over-regulated, and politicized, making them out of reach of many who need them. But, the global marketplace and the internet are turning abortion access on its head, with some women starting to order pills for delivery directly to their mailboxes. As part of a Comics for Choice fundraiser for the National Network of Abortion Funds, Artist Nomi Kane and the Plan C Team tell the story of how women in the United States are starting to reclaim this safe and effective technology for self-use.